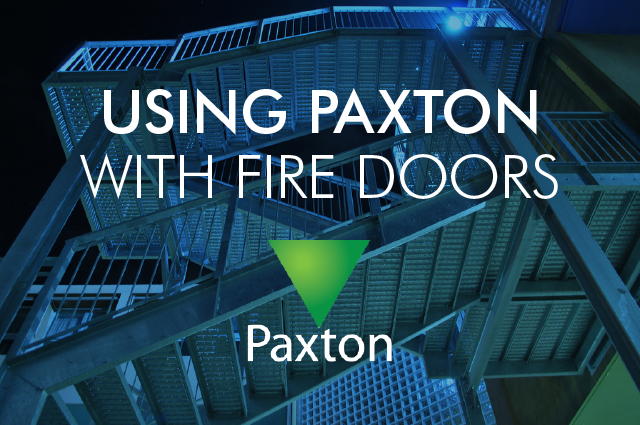 If you own a business, you’ll be well aware of the strict Health & Safety laws surrounding fire doors and exits – but how best can you protect your customers and staff in the event of a fire? If you plan to use Paxton access control with your fire doors, read this post before installation.

Fire doors in common areas should be marked with regulatory signs. These show a white person running against a green background, usually accompanied by the words ‘FIRE EXIT’ or simply ‘EXIT’, with a white directional arrow. Where a door is the only way out of a room, it should be treated as an escape route.

A person must be able to open a fire escape door in the event of an emergency. This is normally through a metal handle that directly opens the lock. In large commercial applications, such as stadiums or warehouses, where there are large numbers of occupants, the usual method is by using a crash bar. This mechanically pulls open the locking bolts. Where Paxton access control equipment is fitted to a fire escape door that includes an overriding mechanical release, there are no extra considerations needed.

Where a fire escape door has an electric lock, you must ensure that there is a ‘fail safe’ way of opening the door in the event of an emergency. Electronic equipment is more vulnerable to fire damage and potential failure, in comparison to mechanical locking.

The first step is to use a ‘fail open’ release for the door. This type of device requires power to lock; it is therefore unlocked when no electricity is supplied. Magnetic locks are normally fail open.

The next step is to have a ‘fail safe’ method of cutting the power to the lock to ensure the lock releases in an emergency. In the event that the access control does not work, there must be an emergency override. In most commercial premises, this is provided by a break glass switch fitted on the 12V lock supply line. Break glass switches are widely available in green and white. Red must not be used as this can be confused with the fire alarm system.

In premises where large numbers of people may have to exit at once, doors will almost certainly be released by an interface with the fire alarm system. In most cases a local override at each door will also be required. It is possible to link your Paxton access control systems to the fire alarm panel.

Net2 can do it for you

Net2 can actually send ‘Open door’ commands to specific doors on receipt of the alarm signal. While building owners often specify this, it is NOT a ‘fail safe’ method of opening the doors as it relies on the access control system being fully functional. A local release method will also be required. If you would like this to a part of your Paxton access control package, consult your engineer during installation.

Your installer will provide all the information you need, however it is the end user (or architect or other consultant) that is responsible for defining the fire escape routes, dependent on the requirements of the local fire officer. It’s also important to note that these will vary from authority to authority.

Where doors are released in the event of a fire alarm, the security provided by the access control system may be nullified. A break glass unit used in an unauthorised manner will leave the door unlocked. Where high security is required, consideration should be given to using locks, door contacts or break glass units that are linked to a monitoring system. Paxton’s Net2 can provide this facility.

It is also important that the locks used on a fire exit should not jam under side pressure before the door is unlocked. A person can be pushing on a door in panic while operating the mechanical release or break glass switch, causing side pressure on the door. This is particularly likely where a number of people arrive at the door in seconds in an emergency.

Many electric motorised bolts, solenoid bolts and some electric releases will jam in this situation. Models are available that have been designed, tested and proven to open in these circumstances. Always get the manufacturer’s details regarding this. Maglocks are inherently safe in this regard although be wary of cheap models that can stick over time due to residual magnetism in the armature.

If you need any additional help, advice or information on using Paxton access control in conjunction with your fire doors, contact one of the ACC team on 0161 883 2502.