Peckforton Castle is an enchanting hotel in the heart of Cheshire, described by English Heritage as ‘the only intact medieval style castle in the country’. Built in the middle of the 19th century as a family home for Lord Tollemache and designed in gothic style by architect Anthony Salvin, today Peckforton Castle is one of the North West’s leading venues.

Extremely popular for leisure breaks, corporate events, conferences and weddings, Peckforton Castle has been used as a location for various films and TV shows, including Robin Hood, Doctor Who, Sherlock Holmes and most recently the Coronation Street 50th anniversary DVD ‘A Knight’s Tale’. The owners of Peckforton Castle, the Naylor family, have worked hard to maintain its authenticity whilst providing guests with every modern comfort.

Chris Naylor, Managing Director of Peckforton, says: “We successfully strike a fine balance between preserving the heritage of this magnificent venue and ensuring all modern facilities run smoothly.”

When the Naylor family took over the running of the castle in 2006, son Chris set about enhancing the visual aspect of the Grade I listed building, yet still making sure it functioned well as a hotel. Improving secure access to the hotel’s 48 en-suite rooms was an important part of his plan. Although the hotel had previously used a lock and key system for the rooms, Chris felt that something more advanced was needed to offer guests a superior level of service.

In early 2010 he called on experienced installer, Simon Farmer of ACC Security Solutions, to specify an electronic access control system for the newly restored wing of the castle.

Simon says: “After taking a look around the hotel we knew aesthetics would be very important, almost the main requirement for the job. Paxton’s Architectural readers were perfect because they are so low profile, it meant we could offer discreet locking for the rooms. When fitting security in a place like Peckforton Castle you don’t want Fort Knox, you want to do the job discreetly.”

Simon and his team installed Paxton’s PC based, Net2 access control system on 22 doors, including 10 guest bedrooms, the 2010 Brasserie and the lift. Now, when guests arrive at Peckforton Castle they are given an access card programmed by reception that will work the lift and allow entry to their bedrooms. Once in the lift, they swipe their cards on the reader and the lift knows exactly which floor to take them to – it will not give the guests access to any other floor.

‘Paxton’s Architectural readers were perfect because they are so low profile, it meant we could offer discreet locking for the rooms.’

While the new Net2 system has really improved security for everyday hotel guests, it’s also particularly good for when Peckforton Castle acts as a wedding venue.

Karl Lummis, Maintenance Manager, says: “We do 180 weddings a year. Peckforton Castle is an ideal location for exclusive weddings, we’ve even had one or two famous footballers get married here. Security is very important; it’s a castle, so of course people like to explore. The Net2 system means we can control exactly where they have access to – and where they don’t!”

Because the look and style of the hotel is so important, Chris chose to have Architectural readers with glass inserts branded with the Peckforton Castle logo. To match this, Simon used the card designer feature in Net2 to brand the guests access cards in the same way, for a really professional finish.

Chris is really pleased with how Net2 and the Architectural readers are working for the hotel’s new wing. Before he and his family took over Peckforton Castle, Chris had a successful architectural interior design company, so he had exactly the right experience to oversee the refurbishment of the new wing. He said: “The Architectural readers
fit in really well here. I chose them because while they look discreet, I know they are also a good bit of kit.”

‘We tend to fly the Paxton flag when it comes to access control, we didn’t look at any other system for this job.’

Over the next five years, Chris plans to expand the Net2 system across the rest of the hotel when he develops the venue as a leisure and conference complex. As and when this happens, Simon Farmer and ACC will be a part of this process, installing Paxton’s Architectural readers on 38 stunning individual guest bedrooms.

Simon says: “We tend to fly the Paxton flag when it comes to access control, we didn’t look at any other system for this job. We like Paxton because the products are attractive as well as being the right price, ideal for a site like Peckforton Castle.”

back to case studies 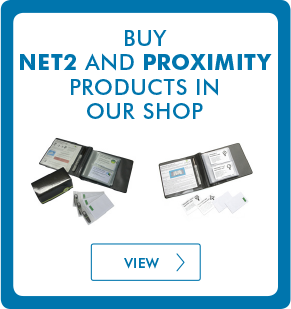